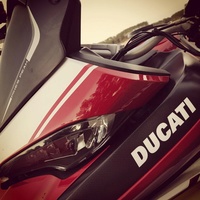 PanigaleV4 a écrit:"We were the first, over a year ago now, to reveal the news from Claudio Domenicali, that the company was working on plans for a superbike with a V4 motor. Obviously we were not satisfied to leave it there and we have continued to capitalize on indiscretions, information and gossip to bring you this world first scoop: we photographed the new V4 during it's initial tests at Mugello. We knew that the bike had already been testing for a long time, usually at the Fort Knox that is the Nardò track, but it was only a matter of time before they tested at other tracks and after many unfruitful surveillances, we finally captured it with one of our telephoto lenses! The V4 is still at prototype stage, but we can confirm some information that with hard work we were successful to retrieve. Let's clarify some points quickly: the V4, it's name still being one of the best kept secrets by Borgo Panigale, has very little in common with the MotoGP bike and is still further from the Desmosedici RR that many had hoped it might emulate.

The D16RR, the only V4 approved for the street that the company produced, was in fact assembled by hand, initially 500, then the number went up to 1,500 at a then prohibitively costly 60,000 euros price tag. Practically all were sold and many wealthy individuals who were lucky enough to own one have not been disappointed. It had a lattice frame welded by hand, rear supports in carbon, a box section aluminium swing arm, pressurized forks, a classic 17” front tire 120/70 and 16 inch rear rim with rubber realized from Bridgestone measuring 200/55. Also the motor was born from experience gained at the time of it's development, competition results and data, with a cubic capacity of 990 cm3 with a bore of 86 milimeter that at present is prohibited in all competitions, with sand cast crankcases, that supported the swing arm. Valves and connecting rods in titanium and covers in magnesium. This combination, although it was not certainly the lightest, was also rather bulky because the position of the cylinders was practically too “L” like for purists, and aerodynamic design of the V4 has taken years since then to be refined. The new V4 shares practically nothing, while from the current motor in MotoGP many technological features will be derived, not so much materials, more like the layout, geometries and aerodynamics.

The design has a lot of the Panigale traits within it but will offer more grip, more than could be realised by the current Panigale, of which traces are evident in these shots. The chief stylists during the last few years speak French and the designers, Julien Clement (the father of the Scrambler) and Jeremy Faraud, have seemingly not moved away much from the magnificent lines designed by Gianandrea Fabbro for the 1199: the nose fairing has been modified in size around the headlight and air inlets to accommodate the new LED lighting. The fairings are closer fitting to accommodate the larger cross sectional dimensions of the four cylinders but leave more of the engine exposed revealing more of the mechanical components

Obviously it is on the mechanical side where you'll find most of the marked differences, even if the bike does not incorporate substantial innovations. Anyone expecting a double frame beam in aluminum in MotoGP style will remain disappointed. The wheelbase is shorter in order to compete with industry levels of agility, that currently are so evident in models such as the new Honda Fireblade. The engine remains a stressed member, providing support for an aluminium 1299 style monocoque frame. However the structure will be slightly extended to offer greater flex and yet retain torsional rigidity, currently one of the major limitations of the current Panigale. The swing arm, will be classic Ducati, aluminium SSA, likewise the rear subframe will be aluminium.

The enormous exhausts which share similar style cues from the Panigale, likely feature by pass valves which will work in conjunction with variable length injection inlet trumpets and changes in ignition. Akrapovic will provide a system in titanium for both the collectors and silencers. In view of Euro5 (the norm from 2020), it's also not possible to rule out a side exit system such as on the 959. The motor, as said is wider, but overall is more compact in length and height, the heads are of a lower profile, due in part to the pistons reducing in size from 61mm (1299) to 50mm, hence more Superquadro than V4. The engine has been tilted further back allowing for a single radiator unlike the Panigale. We cannot rule out a more traditional two part system with the lower radiator being an oil cooler, since the engine cannot accomodate an oil/water heat exchanger bolted to it, within the space available.

The rear shock absorber has been relocated into the void in front of the rear swing arm, similar to the Aprilia RSV4. Speaking about electronics, ABS cornering, ride by wire, with the possibility to manage each bank's butterflies differentially, in order to improve the effectiveness of controlling engine braking (as has been used by Kawasaki in Superbike racing); the traction control obviously will be an advanced or mature version of the current EVO system on the later Panigales. As far as the electronic suspension is concerned, it is unknown in what direction Ducati is looking. Ohlins can only propose a solution that is “event based” while true active solutions can at present only be supppied by Sachs (see BMW S1000RR). Its yet to be seen which path they will take.

What is clear is that Ducati are building a power monster, having decided to fight on the same ground as the competition. With a reliable source claiming that on an engine test run, the power output was in excess of 210bhp, the V4 will be able to break the 310kmh threshold for maximum speed. We are practically sure that, as has happened historically, the bike will be offered in three versions. There will be for sure an “R” with a displacement 1000cm3 in order to comply with the rules of homologation in competition, while the “S” and the base will have the larger capacity 1200 engine.

The prices we have unoffically learned from sources, are a 5-10% increase over the Panigale. It's likely entry level models will cost from 23.000 euros, more so for the S, with a smaller comparative hike for the R. Ducati aims to compete in European SSTK as well as the Italian Superbike championship, whilst WSBK will likely not see one until 2019. For many the wait until EICMA 2017 seems long enough!" 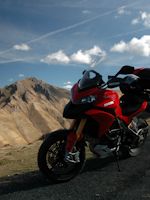